New McCarthyism in Australia: Solving the Mystery of my Ban From Entering Lebanon!

On November 2015, I was banned from entering Lebanon. 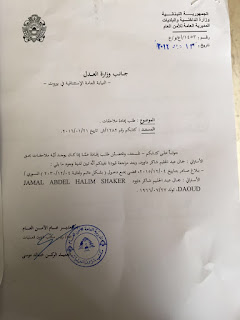 After consulting many legal experts, here in Australia and in Lebanon, I got the same answer: the ban was demanded by Australian authorities. Despite the fact that I have a clean police check in both countries, I discovered that our authorities conspired with foreign authorities to get me banned from entering Lebanon. 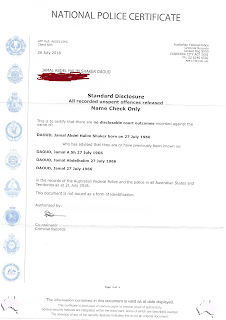 One of the lawyers I consulted advised me to apply for freedom of information to solve the puzzle. I did that.

Australian Federal Police (AFP) sent me a file of many pages. On these pages there was no information as all was redacted. The reason for this? - releasing information will undermine National Security and will affect Australian relations with a foreign power. 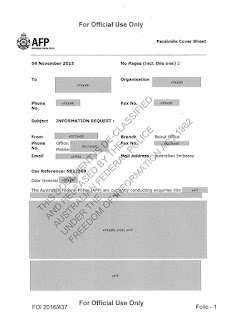 Good to know that you are so dangerous so as to potentially affect national security!

So I contacted the office of the PM and spoke to the staffer there: “Hello I want to report a dangerous man in Sydney streets”.

The staffer got excited. She thought that she could get promotion for such discovery. “Who is that?” and I could hear her on the other side of the line starting to write.

“His name is Jamal Daoud”.

“So you are reporting yourself?”

“That is correct. I received a letter from AFP that I am a threat to National Security. So why am I still at large?”

She did not know what to say except for “give me a sec”. I guessed that she went and spoke to someone more senior.

“Sorry sir, we have no adverse information against you. You must have been mistaken”.

“I can send you the decision of AFP to decline releasing my file because it will undermine National Security”.

“Sorry, we cannot help you. You can contact AFP”.
I did contact AFP. However, until now, I cannot get any answer. I consulted more than four solicitors to initiate a legal case against AFP. They advised me that we have no chance to win. One solicitor asked me to consult Legal Aid. I did. The Legal Aid solicitor was shocked. He asked me to provide a statement and all information. After I did, he told me that he will handle the case, as it is a very clear case of gross abuse of my human rights. I waited for weeks for the Legal Aid solicitor to start the legal case against AFP.

The Legal aid solicitor got back to me and told me that his mangers asked him to abandon the case. He told me that he was told that authorities are threatening to penalise Legal Aid if the case is initiated. The managers cannot jeopardize the funding of their organisation by taking on this case.

The former member of the terrorist organisation, Ananda Marga, the Zionist moron Tim Anderson has a theory here. He claims that I was banned from entering Lebanon under the request from Syrian authorities.

But hey moron: I entered Syria several times following the ban. So work this out, according to this moron’s logic, Syrian authorities asked Lebanon not to allow me into Lebanon en-route to Syria, but I could fly directly from Kuwait to Damascus? That does not make sense.

His fellow member of the spying cell, Dave Carew, has another theory. Dave claims that Hezbullah asked for the ban. But the ban came directly from the office of the Minister for Justice, General Ashraf Rifi to be precise. Dave wants to convince us that Ashraf Rifi is indeed a Hezbullah General. Good to know that this so-called Hezbullah General according to Carew, demands Hezbullah surrender its weapons. Carew’s “Hezbullah” General Rifi also repeatedly demands sending the party's officials to the Hague for crimes against humanity. 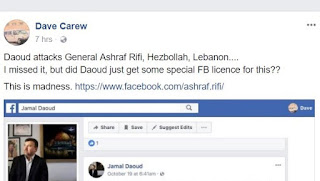 On the other hand, Tim and his dumb follower Carew, did not take into account that the AFP admitted it was behind the ban in the official documents handed over to me.

We can conclude here that Australian authorities coordinated with a former member of terrorist organisation and with the then Lebanese Minister for Justice (Rifi) to ban me from entering Lebanon. Why? Australian authorities did not hide their opposition to my activities to help Syria. That includes my repeated visits where I distributed aid and as part of solidarity tourist missions.

Let me mention one last point here that will shock you. In the same year that the AFP contacted and coordinated with a foreign power to abort my visits to Syria, the AFP Commissioner was publicly farewelling another publicly “pro-Assad” group. In 2015, and few months before the AFP contacted Lebanese authorities to ban me, the AFP Commissioner invited members of another group heading to Syria, the group that includes a former member of a terrorist organisation, to wish them well and for success. Strange isn’t it?

So can we deduce that there are good and bad “pro-Assad” activists? And how do the authorities decide on this matter?
McCarthyism has begun in Australia under this federal government. Our responsibility is to help end the rule of this government and to end the targeting of citizens because of their political views. And, we will be totally committed to helping achieve this.

Next article about McCarthyism in the Department of Immigration - Office of Migration Agents Registration Authority...