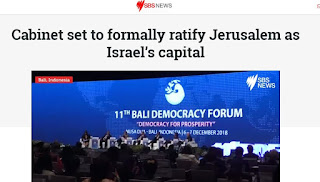 The Morrison government's decision to move the Australian embassy to Jerusalem is a very dangerous strategy of inviting terrorist attacks on Australia in a bid to win the unwinnable election.

If we take into account that floating this idea during the Wentworth by-election, where around 15% of voters are Jewish, did not result in a win for the Liberal candidate (who happened to be of the Jewish faith and served before as an Australian ambassador to Israel). On the contrary, many progressive Jewish groups campaigned against this move as “dangerous” and one that could expose Australia to terrorist attacks.

Even ASIO and other security agencies gave the same warning to the Morrison government.

Internationally, flagging the idea stirred a huge backlash against Australia from its neighbours and the majority of state members of the UN.

So, if the policy is not popular among anyone in Australia and around the world, why is the Morrison government going ahead to adopt and implement this decision before Christmas?

Let us put other pieces of the puzzle together in order to solve the mystery.

In the last two months the Liberal government has been busy attacking Muslims and trying to stir up anti-Muslim hate. This is at the same time when it is still sleeping with Muslim extremists. Let us remember that the Lebanese Muslim Association and its allies of mainly extremist organisations were advocating Muslims to vote for the Liberal party since the 2011 election and until now.

Let me also mention that many neo-Nazis had joined the National party in large numbers and controlled some branches.

So what are the details of this election strategy to win the next election, an election all opinion polls indicate a comfortable win for Labor?

Let us go back to the US decision to move the embassy from Tel Aviv to Jerusalem. After announcing this decision, a wave of violent clashes swept many regions around the world, including inside the USA condemnation of this decision. Terrorist groups like ISIS and Al Qaeda vowed to conduct terrorist attacks against this decision or take revenge on this move. This is exactly what ASIO warned the Morrison government about.

But these threats and actual violence in fact helped improve Trump's popularity and this is the election strategy of the Morrison government.

The Morrison government comprised mainly of close-minded red-necks and racists thinks that if it worked in US for Trump, it could work for them. This could be the lifeline that will save them from not only defeat in the next election, but total annihilation.

Morrison did not take into account the big differences between the US and Australia, including the fact that the US is a super power that flourished for decades on intervening militarily in other countries, hence being subjected to terrorist attacks and big losses among its military personnel.

The Morrison government election strategy is simple, but highly dangerous. His advisers, especially Peter Dutton, think that stirring hate and Islamophobia, provoking people and encouraging racism and extremism will militantize society to the point of inviting both Muslim terrorists and white-supremacist criminals to clash or conduct terrorist attacks on Australian soil. At this point, and taking into account its lies on its successes of managing borders and its tough rhetoric against extremism, the Morrison government will be seen as a saviour during a time of terrorism and security turmoil.

Setting a peaceful country on fire should not be used as an election strategy for a government of failures. A government that failed at all levels in managing this wealthy peaceful and multicultural nation should not be allowed to set this great nation on fire for its own benefits including that of keeping ministerial privileges, entitlements and being in the spotlight.

In the last month and after their defeat in the Wentworth by-election and the Victorian election, this government adopted several draconian, extreme measures that are both not needed and also provocative. The decision to move the embassy to Jerusalem is the last component in such a suite of provocative and dangerous policies that this deeply racist and extreme government has adopted.

We should work very hard to oust this government from power before Australia faces France' fate. We can solve this matter without the help of Yellow Vests.