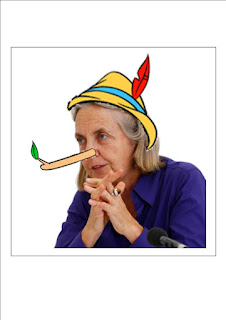 After Lee Rhiannon and her faction of mainly ex-Stalinists opportunists realised that they lost their plot to deny Ian Cohen the platform to run for pre-selection, they understood that they were left with one option only. The only option is to campaign against Ian in the election in a bid to see him lose, and so enforce his retirement with deep humiliation. In 2003, the Greens were standing on 7-8% in all opinion polls. Ian needs only 4.5% to win. Maybe less with some good preferences.

To see Ian lose was very difficult shot, for many reasons:
- It is very difficult to cause total collapse of Greens popularity, to this low point.
- Any attack on Ian, means attack on the Greens party... the party that Lee represents in NSW LC.

Despite all these, Lee and her faction did not hesitate to gamble with everything to achieve her dream of absolutely controlling the NSW Greens. I was told by Ian Cohen at later stage that Lee had the dream to destabilise Bob Brown’s leadership by challenging him, to replace him in Greens leadership.

Lee faction’s tactics are very simple: attack Ian on personal level by claiming that he is personally a very conservative person that is not compatible with the image of the Greens as progressive party.

The attacks were comprehensive and vicious: there was an all-out-war against him. They did not leave any personal level they did not expose or demonise. Lies, fabrications and sometimes true personal incidents.

The levels of attacks were:
1- Old man with no energy: dead man walking
2- Ian’s marital status: and his different relations with different women.
3- Ian’s background as former citizen of “Israel”

1- Despite the fact that Ian and Lee were born in the same year, Lee spread euphoria against Ian that he is old politician, lost his energy and became very exhausted. The attack had several goals to achieve. Lee did not only want Ian to lose his popularity and so lose in the election. She wanted him to come out of the election with deep scars, possibly deeply depressed and humiliated. By achieving this, even if Ian wins the election, he will re-consider his career on the long run. And this is what she wanted to achieve, as she was almost sure that Ian will win in the election.

Lee and her faction were very vicious in their attack on Ian’s mental status. There is no doubt that the campaign left its toll on Ian’s mental status. But more importantly, by the end of the campaign the party was deeply and bitterly divided. Ian was left with deep scars on his credibility and morale. Lee used all kind of lies and deceptive claims against Ian. And Ian and his faction would not forget this to Lee and her faction.

2- Lee spread roumers that Ian is treating women very badly. The roumers, that were communicated to me personally by Ian’s ex-girlfriend and strong supporter of Lee: he was cheating on her, treated her badly, no respect ....

3- As I said that even before the pre-selection process was concluded, I was approached by Geoff Ash and John Kaye asking me not to vote for Ian because he is Zionist. After he was pre-selected, I, with other party candidate, were approached again and were asked about what we think of Ian’s running for election. We (both of us are Muslims) were asked about Muslim and Palestinian communities’ opinion of Ian Cohen running for election. John Kaye asked us “did you hear any communities’ criticism of Greens decision to run “Zionist Jew” for NSW?”... I personally felt that John was directing us to attack Ian among Muslim and Palestinian communities on this particular issue.

Lee tactics did not work. Ian won election. He served in NSW LC for full term. He did not retire until he enforced Lee faction to agree to have balanced parliamentary team. He retired only when he secured 2 of his faction members (Jan Barham and Cate Faehrmann) to be MLCs in 2011.

But the campaign had negative impact on the Greens unity, until now. The party had two factions that are fighting to break each other at all levels. In 2010 federal election, Ian’s faction refused to help Lee in her election campaign. NSW candidate, not other than Lee herself, got the least votes among Greens candidates for the senate. All candidates got around 13% of primary vote, where Lee got less than 10%. She nearly lost in that election, when all other candidates won comfortably, most of them on primaries.

I need to mention here that in writing my notes here, I am not siding with Ian against Lee on any ideological issue. On the contrary. I had always trouble with Ian’s conservative views. But Ian was always ready to share power, respect others’ views and respect any deal he makes. Lee, on the other side, was lying at all levels. She will pretend to be progressive, when in fact she has no commitment towards any social justice issues and had no achievement in her long political career. She is not a politician that could be respected. And she is power-thirsty, with no willing to share power.