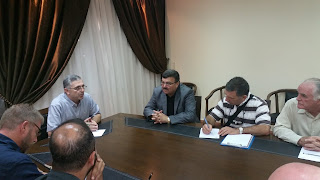 Each time I visit Damascus, I make sure I meet with Dr Ali Haidar who is the minister for reconciliation. Dr Haidar is a very humble knowledgeable and open minded person. He is part of the current Syrian government representing the national opposition party, the Syrian Social National Party.

On Wednesday 21 September 2016 I had arranged a meeting with the minister in Damascus. The meeting was part of our 3rd International Peace Tour to Syria.

Our group arrived at the ministry’s offices around 1pm. We were welcomed by Dr Ali’s aid and taken into the meeting room. The minister arrived and shook hands with each participant giving everyone a very warm welcome. He apologised for being late explaining that in the current circumstances it was very difficult to plan the day.

We completely understood the situation as we witnessed in first person. Check points are everywhere around the city. This week alone, terrorist tried to attack Damascus from Jober. They only managed to advance a few meters but this was enough for a sniper to kill innocent residents who were in the vicinity of Abbasyeen square. One of the victims was a poor taxi driver who was shot dead and was still in his taxi. The snipers made it difficult for the authorities to retrieve his body and the damaged taxi.

After the warm welcome, the minister explained to us he didn’t want to deliver a possible boring speech and was happier to answer instead, any questions we had for him.

The first question went straight to the point: how can the opposition be part of the government.

“At the beginning of the crisis, we shared the views of the opposition and their demands towards the government. One of the main one was the fight against corruption, changes to ensure more democracy and transparency in the government. But then we noticed the crisis took a totally different path


In July 2011, the Syrian government declared it was open to any suggestions. A consultation summit was called to discuss the needed reforms. Our party advocated for other opposition groups to attend the summit and give the government the opportunity to show leadership and willingness to listen.

The majority of the opposition parties instead, called for a boycott of the summit. Our party was also contacted and asked not to participate.

The summit was convened and lead by the president’s former deputy, Faourq Al Sharaa. The government was eager to prove their willingness to listen and cooperate.”

It is at this point of the meeting that Dr Ali dropped a bomb-shell.

“Just before the summit, we were offered large sums of money by Qatar to boycott the summit and the reconciliation process. When I refused the offer of money, the threats came and my son was murdered.

The assassination of my son gave us an indication of the reality of the crisis.

We were offered different portfolios in the new cabinet. I came up with the idea of creating a ministry for national reconciliation. The president agreed and invited me to become the minister”

Mark, one of our participants from Canada, asked the minister if the 2011 drought in Syria was behind one of the reasons for this crisis and the “uprising”.

“There were a lot of premeditated reasons, but the drought wasn’t one of them.
I want to be clear. The current crisis would have happened even if we had a perfect government. The reason behind the current crisis is related to ensuring the security of Israel.

After Israel’s defeat in the Lebanon war in 2006 and Gaza in 2009 by both Lebanese and Palestinian resistance, Israel supporters thought the best chance to secure the state of Israel, would be to suffocate the resistance and their supporters. This is the reason of the crisis in Syria.”

There are more than 50 areas under reconciliation agreements, including Darya recently.”

Q. What about the sanctions?

“Sanctions are a very painful issue. It is devastating the lives of ordinary Syrians.

As a minister, I am not directly affected by sanctions and I continue to work as normal. It is the ordinary Syrians who are directly hit by these inhumane and illegal sanctions.

Such sanctions have negatively affected our health and education system. We are short in many foods and medicines.

The sanctions were put in place to push the Syrian people into poverty and miserable conditions to encourage an uprise. This has failed and today more than ever the Syrian people are determined to stay united.”

In conclusion, to understand the current crisis and how it reached this level, we need to ask a vital question. What was Qatar’s role in the Syrian crisis?

Why did Qatar offer millions of dollars to opposition parties to make them refuse to talk with the government?

Many of the opposition, who refused such offer, ended up dead.

I am sure that the Australian media will not pick up this story as it does not fit their narrative on the Syrian crisis.

The Australian media is clearly participating in supporting terrorists in a bid to destabilise the legitimate Syrian government.