When I defeated Liberals on 'citizenship for boat refugees': lessons for future!

The Liberal government and immediately after defeating Kevin Rudd's government 2013, started implementing its electoral promises. The first promise was to punish the refugees and asylum seekers arrived by boats. The job was assigned to the then minister for immigration Scott Morrison, currently PM.

Directive 62 also directed the department of immigration not to approve any citizenship to any permanent resident who arrived by boat, until all other applicants for citizenship are granted the citizenship. This meant that permanent residents who arrived by boats will never be granted citizenship and will never be reunited with their loved ones. Without citizenship, they also could not travel to their homeland to live with their partners and children. They also will not be able to travel to many (if not the majority) of Western countries seeking better life with their children.

Most of permanent residents affected by this directive was already living in the community since 2011-2012.

What happened later was horrific. These people were living without their families since they departed their homeland (between 2010-2011). The ones who dared to travel to meet their families, had their visa canceled upon return.

Tens of these refugees contacted me and asked for help. We were powerless. The government just disregarded the ruling of High Court. And the refugees were very scared to speak up. There was no clear solution.

At the beginning of March 2018, I came up with the idea that will end these people's suffering pretty instantly. I contacted many refugees and explained to them the idea. Many of them welcomed the idea. 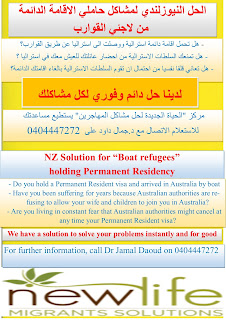 To help me spread the word about the 'project' I contacted journalists from Chanel 7 and 9. Both welcomed covering the story. In fact they were competing on the story, and asked me to give one of them the 'exclusive' right to cover the project.

I decided to give the story to Chanel 7. Bryan Seymour came to see me on the next day. I organised him to film two Iraqi refugees on permanent residency who want to try the solution.

Bryan Seymour contacted both NZ and Australian immigration department. Both confirmed to him that NZ solution is viable and legal. 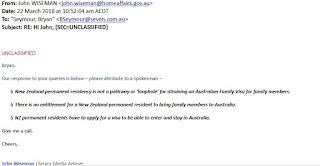 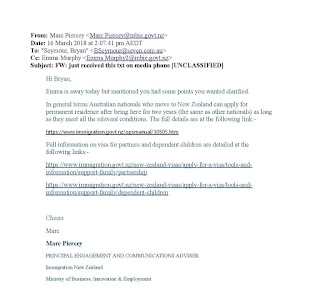 The story was never aired because we were waiting for a refugee to travel to NZ and bring his family to live with him in NZ.

Within this waiting time, the Australian government 'changed its heart' suddenly. Immigration was removed from Peter Dutton portfolio. The new minister, David Coleman, defied Directive 62 (which was replaced by almost identical Directive 72 and then Directive 80).

Until now, the official announced policy is Directive 80 which prevents permanent residents arrived by boats from citizenship and so prevented them from family reunion. But practically, tens (if not hundreds) of them were granted citizenship and had their families joined them quietly in Australia following August removal of Dutton as Immigration minister.

The change of government policy on citizenship for boat residents made all affected people change their mind to relocate to NZ. They now have a hope that at some stage soon they will be allowed to bring their loved ones to live with them in Australia.

If our story was aired on Channel 7 (or other channels) mid 2018, you can imagine the international embarrassment this government would have faced. We would have proven that NZ authorities treat Australian permanent residents and their families better that the treatment they received from their own government.

One achievement we achieved on this front. And this is why on Monday 29 July, I put the government on notice during the rally demanding justice for refugees on TPV and asylum seekers arrived by boats.

Despite the fact that the Australian authorities had moved quickly to infiltrate the Justice for Refugees movement to divide it, we still insist to tell them 'do not test our patience'.

I am confident that we will defeat this government because it left 30,000 people with no hope. It turned them into ticking bombs. These people are ready to do anything to see any glimpse of hope at the end of the tunnel.

I here urge Scott Morrison to back off and stop playing with fire.