Why the attack on Wikileaks party participation in Syrian solidarity visit

After a week in Syria and many weeks in the Middle East, I am back to Australia. It was shocking that the media is attacking the Wikileaks party for participating in fact-finding visit to Syria. We also were in Syria for solidarity with Syrians, who were subjected to the worst waves of terrorism in contemporary history.

Even before making any comments, we were attacked and accused of all sorts of accusations. This raises very deep concerns.

I thought that media’s roles include trying to investigate issues and expose the truth. As any issue has many sides and involves many parties, it is very vital for any respected investigative journalism to contact all sides, get their version of what happens and then make conclusions.

The Australian media in its attack on our participation in the visit to Damascus sent the wrong message into the wrong direction. Some section of the media is in fact trying to hide truth, keep people ignorant, shut debate and keep trialling people by media reports.

In our visit, we met ordinary Syrians and heard their stories.

We heard the stories of Damascus University students who lost 8 of their colleagues when terrorists launched mortar attack on the Faculty of Architecture. They were not soldiers and carried no weapon.

We also heard stories of families who lost relativise in Adra. Some of their family members were kids who were thrown into industrial ovens alive.

We witnessed mortar attacks on civilians next street where we went shopping.

We heard countless stories of Syrians, both supporters and opponents of President Assad and his government. But both agreed on one issue: the alternative to the regime is total chaos. This includes wide-spread sectarian war as terrorists are declaring the majority of Syrians to be infidels that needed to be beheaded.

Our politicians on other hands are trying to set precedent in international relations.

Our FM and opposition spokesperson want to cut ties with Syrian government and every Politician that talks directly to it. So our government and opposition want Australia to stop dealing and talking to Russia, China, Iran, Venezuela, India, Brazil, Cuba, South Africa..... and the list will include dozens of influential governments. Our politiains in fact want to sideline Australia and marginalise its foreign influence.

I can reveal here that during our talk with Syrian PM Dr Wael Halqi, I asked him to confirm or deny many reports that Western countries are talking directly to Syrian government and seek security cooperation. He confirmed that many Western countries members of NATO are seeking cooperation in “fighting against terrorism” before its spread to their countries.

With confirmed reports that ASIO has serious concerns about Australians fighting currently in Syria and their possible return to Australia, the Australian politicians’ attitude here is denying Australia cooperation with Syrian authorities to fight against possible terrorism coming from Syria to the streets of Sydney and Melbourne.

We will post many specific stories of atrocities committed by rebels in Syria in the next few days. Such atrocities that turned the majority of Syrians against the so-called Syrian revolution. Not only this. The devastating impact of Syrian “revolution” is having many negative impacts on neighbouring countries. In Jordan, for example, the majority of Jordanians prefer corrupted government over any repeat of Syrian scenario. On the contrary. Jordanians are demanding from their government more crack down on extremists, even if this means more restrictions on human rights to avoid such evil scenario.

My experience inside the United Australia party: why UAP’s humiliating defeat & When will Ralph defect from UAP?

After running as a federal candidate for the United Australia party in the seat of Reid, these are my observation about the reasons why UA... 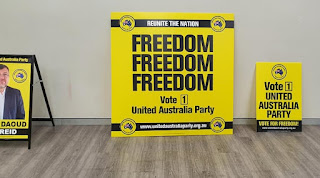